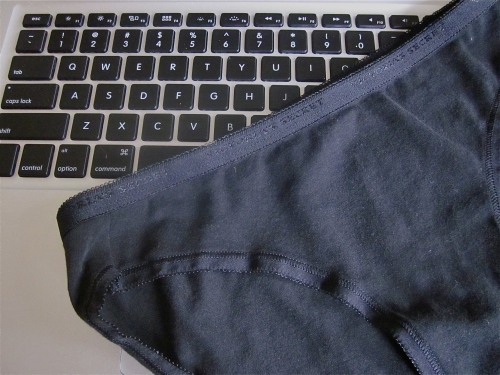 Being a mother consumes more of my time than I would have thought prior to having my daughter. With home life and vocation in the mix, some things that I need take a back seat, like new underwear. So, when Christmas time rolled around this past December, and I found myself at the mall – a place I tend to avoid – I made a point of buying new underwear for myself as I went about buying for others.

I don’t want to spend too much time talking about my underwear preferences, but I need to say two things: I’m a very small person, and I like black cotton. While shopping at a department store, I visited their lingerie department and came across three women representing Jockey who were setting out their latest wear. I asked them about XS 95% cotton underwear and watched them furrow their brows. Cotton isn’t the main fabric of choice for their line or any other line in the store (petroleum-based microfiber is where it’s at). As I mourned the lack of cotton choices, they mentioned that I could try a “lower quality brand” like Victoria’s Secret, but warned, “you get what you pay for.”

Off I went straight to Victoria’s Secret, as my goal at a mall is always to get in and out as quickly as possible. Lo and behold, they had an entire table of 95% cotton underwear in myriad patterns, styles and colors – and in XS no less! Furthermore, it turns out their cotton blend has organic, fair-trade cotton in the mix. Bonus! Despite the long line at the registers, I was thrilled. I already had my gifts for others in hand, so I headed home to throw away a bunch of old underwear and start anew.

Sadly, the very next day I came across an article by Bloomberg News that took my joyful experience of finding new underwear away. The organic, fair-trade cotton Victoria’s Secret is using comes from cotton farms in Burkina Faso, one of the poorest countries in Africa, and it turns out that cruel child labor is woven into the fabric. Bloomberg exposed the story in which they reported that children 10 years of age and up are working these fields as literal slaves.

Abandoned by their families and forced to work, these children are denied school and are instead subjected to extreme working conditions, a sleeping mat as thick as a magazine page, one meal a day if they’re lucky, verbal abuse, and regular beatings if they aren’t working at a level productive enough for the farm’s owner. They are not paid for their work. There are approximately 90 children subjected to this lifestyle on these cotton farms of Burkina Faso.

The online Bloomberg article features a video of a child named Clarissa, so I was able to hear directly from her of her suffering. She lives with terror and malnutrition, exhaustion and pain, and is all of 13 years old. As I read the article, I became keenly aware of the underwear I wore. Clarissa’s hands could have picked the very cotton that I had bought with initial delight. My underwear was suddenly tainted, and I wasn’t sure what to do.

My first response was to email Victoria’s Secret and ask them what they were doing about the situation. Their parent company, Limited Brands, sent back an email stating that they were shocked by the allegations, which went against the company’s values, labor codes and sourcing standards. They were launching an immediate investigation. Soon after, they formally reported that Bloomberg was not accurately representing the facts, that Clarissa was 21 years old and worked on a vegetable farm, not the cotton far. Bloomberg sent out an immediate, thorough rebuttal saying they stood by their original report.

Whom should I believe, and how should I feel about my new underwear? I’m inclined to believe that Limited Brands does have a well-intentioned policy of empowering women in impoverished countries and strictly forbidding child labor. Yet the Bloomberg rebuttal was very convincing, not to mention that the video of Clarissa showed her picking cotton and not looking 21. I’m wearing my new underwear, but when I put them on I think about Clarissa and the other children. I’m transported to Burkina Faso. It’s a very different experience getting dressed than it was a few weeks ago.

And I’m just talking about underwear here. How many other things in my home are manufactured by people who are not treated well, who are poisoned by manufacturing practices and not compensated appropriately for their hard work? My guess is almost everything.

The New York Times just came out with a report on working conditions at Foxconn, the electronics mega-manufacturer in China. The article makes clear that the Apple laptops and iPhones in my home come with a terrible price, including inhumane working hours and the death of workers due to explosions caused by aluminum dust and poor ventilation. The Times singles Apple out, but all the big electronic device companies are manufacturing in China – caught in the tangled, modern-industrial web that allows for substandard working conditions for the sake of cheap prices and available supplies to meet the demands of consumer hunger.

If we want things fast and cheap at the expense of safe and fair working conditions for human beings in China, then things will stay that way. As the Jockey representatives said, “you get what you pay for.” If we begin to put real pressure on companies to ensure reasonable working conditions, then companies will make changes. The purchasing dollar has the final say. True, we will have to pay more for products, but at least they won’t come with the price of unnecessary human suffering.

Continuing to learn about the manufacturing practices behind the things I buy and changing my purchasing habits to support the world I want to see requires a great deal of commitment. I’ve been chipping away at it. I buy mostly organic produce, for the sake of my family, yes, but also for the farmers and their children who suffer from exposure to highly toxic pesticides. I keep my eye out for green and fair-trade products and make a point of buying them. I shop more and more in local boutiques. But I’m still going to buy my food processor – and a lot of other stuff – at a place like Target. And I love my Apple laptop. There’s only so much we can do and so much that needs to be done.

It can be overwhelming, yet I suppose it’s like the starfish story, where the girl is throwing starfish that have been washed up on the beach with high tide one at a time back into the sea. A man watching her says that there are hundreds that have been beached, too many to be saved, and she points out that one saved is one saved. Purchasing more consciously, insisting companies adhere to safe, fair manufacturing practices that do not harm either people or the living earth – each action is akin to a starfish. It’s worth the effort to make worth worthy.