Fukushima and the Role of Catastrophe in Human Evolution 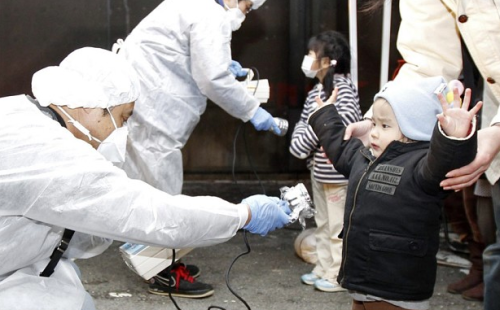 Officials in protective gear check for signs of radiation on children who are from the evacuation area near the Fukushima Daini nuclear plant
Photo: REUTERS/Kim Kyung-Hoon

Sometimes there are impending disasters that are so extreme, I have to tune them out for fear that they will have too great an impact on my capacity to function in daily life.  Such had been the case with the nuclear catastrophe in Fukushima, Japan.  Since the initial accident in March of 2011, there has been little in media covering the ongoing leakage of radioactive waste into the air and Pacific Ocean; little on how a yet-to-be-quelled damaged reactor remains a serious threat to us all.  It was easy enough to tune it out.  Until my daughter Claire decided she loved to eat dried seaweed.

In my Internet meanderings, I had come across an article on Japanese seaweed showing high levels of radiation.  I remember quietly mourning the loss of sushi, knowing I was now much less likely to eat it, not knowing where the seaweed – or the fish for that matter – came from.  Still, I do eat sushi on rare occasion, quietly pushing away thoughts of radiation, telling myself that a little radiation here or there is probably tolerable.

But not when it comes to Claire.  So I looked at the packet of dried seaweed she loves and saw that it was from Korea.  I investigated further and learned that Korea was on the back end of the nuclear meltdown, and Korean seaweed and fish were showing no sign of radiation.  I was relieved, knowing Claire was in the clear.  Time to tune Fukushima out again and move on.

Except that I couldn’t.  I was already knee-deep.  I had learned that radioactive waste from Fukushima has been pouring into the Pacific Ocean for the past 2.5 years and is heading toward the West Coast.  It was deeply disturbing news to bear, yet almost paled in comparison to what is currently happening with Fukushima Diiachi Unit 4, the nuclear reactor that still has the potential to cause the most powerful, widespread nuclear accident in human history.

The damaged reactor, a “house of cards” on the verge of collapse, has more than 1300 spent fuel rods that are in desperate need of being removed.  A removal procedure of this magnitude has never been attempted before.  As was stated in the Japan Times,

“The consequences could be far more severe than any nuclear accident the world has ever seen. If a fuel rod is dropped, breaks or becomes entangled while being removed, possible worst case scenarios include a big explosion, a meltdown in the pool, or a large fire. Any of these situations could lead to massive releases of deadly radionuclides into the atmosphere…”

This worst-case scenario could mean a release of radiation 14,000 times more powerful than Hiroshima.

What does one do with the knowledge that there is a realistic possibility of a nuclear disaster as early as this month, one that would likely reach all of us, especially in the Northern Hemisphere?  It’s so big to take on! And it might not happen.  And if it doesn’t happen, and I monitor where the food I eat comes from, then my family will be safe, right?

Again the potential to tune out.  But I wasn’t able to because I learned that children are 10 to 20 times more sensitive to radiation than adults.  I learned that female children between the ages of 0 to 5 are twice as likely as boys to develop cancer as a result of radiation exposure.  And, though the number of children in Japan exposed to radiation from Fukushima is unknown, I am sure the reality is devastating.  Thyroid cancer is already beginning to manifest in these children – as much as a 30% increase since the meltdown.  Who can predict what the effects will be down the line?

Which led me to Chernobyl.

In 2001 I was at a World Summit on Sustainable Development at the United Nations, working on behalf of the Earth Charter – a civil society document that lays out the essential principles for living sustainably on the planet.  It was the first time my work had taken me to the United Nations.  I remember being in the General Assembly Hall of the UN, listening to country after country speak of the problems that plagued them, many due to climate change – rising sea levels, famine, disease, lack of access to sanitary water, etc.  After two hours of intake I became overwhelmed, felt faint, and left the room to get some air.

As I approached the main lobby, I was overtaken by hauntingly beautiful music filling the space.  It was a Russian male acappella quartet.  I felt my spirit begin to lift as I drank in the harmonies, unaware I was meandering toward photographs of the children of Chernobyl, taken by Paul Fusco.

It was surreal, hearing these exquisite voices as I stared at giant black and white photographs of a generation of children affected by the Chernobyl disaster –  children with such profound mutations to their bodies; children who had lost all capacity for intelligence and normalcy; children who were deeply loved by their parents.  These images never left me, and they came flying back into the foreground of my mind as I thought of the children and parents of Fukushima. 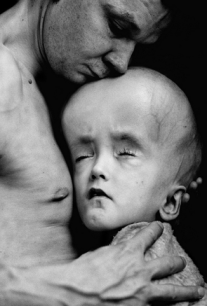 Though I love my daughter more than any other human being on Earth, I find that I can’t limit my relationship to her.  I can’t turn a blind eye to children as a whole when it comes to their innocence and our obligation to provide them with a safe and viable future in which to thrive.

When you look at these photos of innocent children born into the ramifications of a nuclear disaster, the mind will work to file the information in a way that makes it possible for us to move on: “Though these images are profoundly tragic, the radiation in Japan isn’t affecting my child.  I feel devastated by the suffering the children of Chernobyl and Fukushima are enduring, but I don’t have the room inside me to take it into my own, already full life.”

This is close to the perspective I held for a good while, and I would guess I’m not alone.  Holding onto such a perspective helps us cope with realities that carry such unbearable tragedy; realities we feel we have no control over.  But having dug deep into information on Chernobyl and Fukushima, I realize that I can’t let the extreme suffering of these innocent children happen in vain.

I realize, too, that this could easily become my own child’s reality.  Of the 100 nuclear plants in the United States, 23 are GE boiling-water reactors with GE’s Mark I systems for containing radioactivity — the same containment system used by the reactors at the Fukushima Daiichi plant. These reactors are in Alabama, Georgia, Illinois, Iowa, Massachusetts, Michigan, Minnesota, Nebraska, New Jersey, New York, North Carolina, Pennsylvania and Vermont.  All are on major waterways.  Most were built in the 1970s.

As early as 1972 experts and engineers cited shortcomings in the GE design.  GE and the nuclear energy industry still uphold the belief that nuclear energy is as safe as safe can be.  Between the design flaws, the age of these reactors, the unpredictable weather that comes with climate change and the fact that nuclear energy creates radioactive waste, it’s enough for me to feel we can do without it. Now.

As the Chernobyl photographer Paul Fusco said, “Everything breaks.  Everything wears down.”

Nuclear power has the potential to be as dangerous as a nuclear bomb. Chernobyl and Fukushima prove that.  And guess what?  We don’t need nuclear energy!  We absolutely do not need it!  It accounts for 20% of our energy supply in the US, and renewable energy – along with energy efficiency – would easily replace and surpass this energy resource.  We need only let our elected officials know this is what we want.  And that we mean it.

Once upon a time nuclear energy was thought of as the “alternative energy,” a “clean” alternative to fossil fuels.  True, it doesn’t emit greenhouse gases into the atmosphere, but the dangers posed by this source of energy are obvious.  We don’t need radioactive waste, nor the threat of yet another nuclear catastrophe.

Renewable energy does not jeopardize the future, but rather gives it a chance. We can power this entire planet with wind, solar, geothermal, hydropower and other forms of renewable energy that pose no threat to our children or generations to come.  The question is, will we get serious about it now, or do we need more catastrophes to make it clear that renewable energy is worth our full attention and commitment?

To get involved or learn more about a nuclear free world, go to Nuke Free, Fairewinds, Beyond Nuclear, and Nuclear Information and Resource Service.

Sign these petitions urging the world community to take charge of Fukushima!

Informative interviews conducted at a symposium on the two-year anniversary of Fukushima, “The Medical and Ecological Consequences of the Fukushima Nuclear Accident.”  Top minds in the nuclear-free movement.